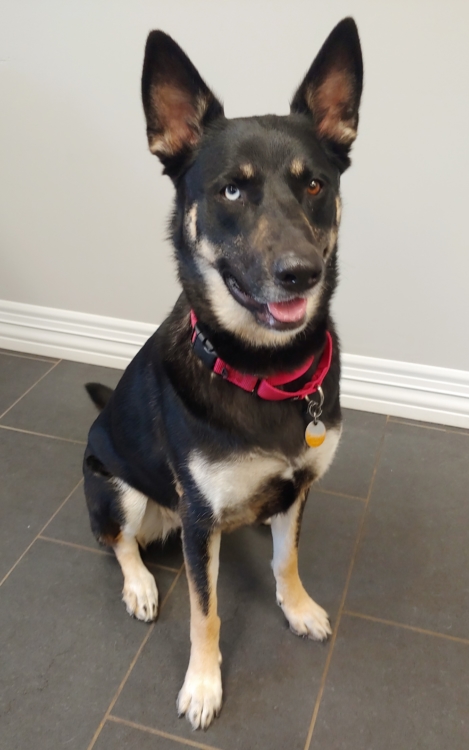 When you have a Tail Wagger whose name is the Greek word for “queen,” it seems only appropriate to share their origin story.

A Vaseessa Tail
Once upon a time, in a barn far, far away on a farm in Wisconsin, nine puppies were born on the first of November 2016. The Shepherd pups were born into a world where there were also horses, cats, and other little critters that made the barn their home. Since it was cold, their home in the stall consisted of a house of straw bales, kept warm with a light.

As things happen, the farmer had made an acquaintance with a man from Minnesota. Once, their conversation turned to the newly born dogs. The man from Minnesota talked with his wife and together they decided to check the pups out.

By the time the couple made their way to the farm, the pups were four weeks old. With eyes now open, there came the exploration of their new world, and some of them had learned how to make their way through the straw.

When the couple first saw them, the puppies were sleeping in a pile under their heat lamp. One by one, they began to pick the puppies up, waking them, and then setting them down to walk around. At the bottom of the pile there was one, under all of the rest, trying to bite and push her way out. The wife picked her up and immediately noticed the blue eye. She handed the stretching, twisting bundle of fur to her husband who then laid the pup down on the floor. The pup started to sniff away. After several moments, she made a circle, and returned to check out his shoes. He picked her up and the two briefly made eye contact. With that, he exclaimed, “This is the one!” Then, after playing and cuddling for a while, arrangements were made to pick up the blue-eyed wonder in a couple of weeks.

Now almost two years old, this German Shepherd/husky mix continues to delight her owners Mary and Richard by always happily greeting them at the front door, saying hi with a light nip to their hand, joining them for a good howl, hitting herself in the head playing with her favorite rope toy, and snuggling up with them when it’s time for bed.

But what’s the best part of having Vaseessa in their life? “Besides having one blue and one brown eye, she is endearing, lovable, and still likes to cuddle,” Mary and Richard told us.

Seven-year-old Timber has been coming to our Eagan location for at least six years. Timber’s DNA test declares him to be one-half pure beagle and one-half complete mystery. His owner Bob tells us that Timber likes to keep them company in his office during the day. While Bob has been working hard trying to teach Timber how to file, he says Timber makes a far better watchdog than office assistant.

Timber was adopted from the Humane Society when he was three months old. He was rescued in Oklahoma, brought to Minnesota, and neutered, but otherwise, Bob and his family don’t know much about those early months of his life. They do know the Timber’s afraid of people and anything that’s out of the ordinary for him. In spite of these fears, he loves going for walks, sniffing things, taking rides in the car, and hiking in the mountains of Colorado. Bob says Timber often looks up at him when they’re walking with a big smile and an expression that demands some positive affirmation along with the good butt rub.

While Timber can be a little wary of people, he’s absolutely devoted to his dad. Bob knows he’s extra safe with Timber around because the faithful boy sleeps in the doorway of the bedroom to protect him. When Bob’s away from home, Timber usually sleeps in the office, so Bob assumes that his wife doesn’t need as much protection as he does.

When Timber visits Wagging Tails, he likes to try to get the other dogs to play with him. Bob says that even though Timber is afraid of everything and most people, he completely changes during his WTPR visits. “It seems to be his happy place,” Bob says, “and he really loves the ladies there.”

When we asked Bob what makes Timber extra special, he said, “He’s mellowed with age, he’s ours, and he’s a great watchdog.”