A Tribute to War Dogs

Memorial Day marks the beginning of summer; coolers are dusted off, barbecues are organized, and long, leisurely weekends are enjoyed at cabins. Another popular activity involves visiting cemeteries to place flowers, clean up gravesites, and share memories of those who are gone but dearly missed. Officially, Memorial Day dates back to the Civil War – a conflict that claimed more lives than any other in U.S. history. Originally known as Decoration Day, people began gathering in communities across the country to honor the 620,000 dead. The tradition eventually evolved into a federal holiday and now commemorates all who have died in service to our country. 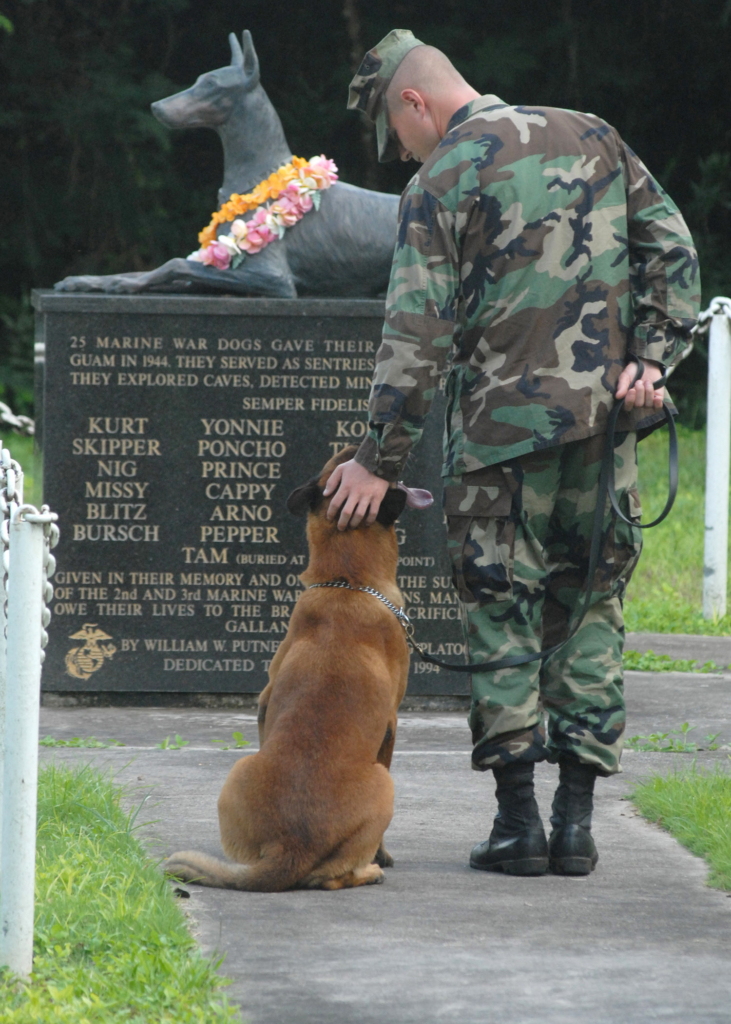 In addition to the servicemen and women who have lost their lives, dogs have fallen as well. Often overlooked for their sacrifice, dogs have served side-by-side with humans as War Dogs in the U.S. military since World War II, but their unofficial history reaches much farther back. This year in honor of the War Dogs’ sacrifice, we pay tribute to the Marine Corps “Devil Dogs” who were later honored through the first national war dog memorial.

When the Marine Dog Platoons landed on Guam in 1944, it didn’t take long for them to earn the respect of the troops. Primarily Dobermans, the dogs were used as sentries, messengers, and scouts. The dogs’ keen senses of smell and hearing were invaluable at alerting the men to dangers in the area, and keeping them safe while they slept. Many veterans would later attribute their very lives to the skills of the Devil Dogs who served along with them. One dog alone, Kurt, a Doberman, saved 250 Marines when he warned them of Japanese troops ahead. The 60 Devil Dogs and their handlers would lead more than 450 patrols during their deployment on Guam.

Kurt was the first Devil Dog casualty on the island. In all, 25 dogs died and 20 more were wounded, but only one handler was lost. The Marines on Guam buried their faithful companions in their cemetery, headstones were also added. Years later, the Marine servicemen’s remains were returned to the United States and the dogs’ graves fell into neglect. When William Putney returned to the island in 1989 to visit their graves, he was dismayed to find them largely forgotten. He had been commanding officer of the 3rd War Dog Platoon on Guam in 1944 and credited his survival on a Doberman named Cappy along with the other dogs he trained.

“These dogs,” Putney said, “lived in foxholes with their men. Their handlers killed 301 enemy soldiers with the loss of only one of my men on patrols. So the fact that these dogs were killed instead of us and kept us from ever being ambushed or surprised at night makes them heroes in my mind.” Putnam led the movement to create a memorial and raised funds to have a monument created. The cemetery would become the first national War Dog cemetery and memorial; a statue of Kurt patiently sits atop the monument entitled “Always Faithful.” In 1994, there was a reburial of the dogs with a 21-gun salute at U.S. Navy base on Orote Point in ceremonies observing the 50th anniversary of the invasion of Guam.

Wagging Tails offers a 10% discount to veterans year-round. Thank you for your service and sacrifice.