As Americans pause on Memorial Day to remember and honor those who have died serving our country, it is important to remember Military Working Dogs as well. 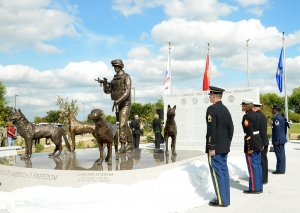 The United States started using Military Working Dogs in WWII and they have served in every military conflict since. Today, there are approximately 2,500 dogs in the U.S. military; the most common breeds include the Doberman Pinscher, German Shepherd, Labrador Retriever, and Belgian Malinois. It is estimated that war dogs have saved the lives of tens of thousands of American soldiers since their service began. 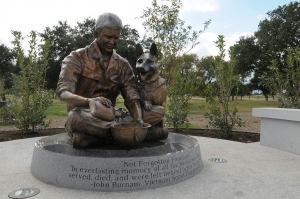 In 2013, their service and sacrifice was finally recognized with the country’s first national monument dedicated to dogs. Located at Lackland Air Force Base in San Antonio where military dogs have been trained since 1958, the nine-foot tall statue is inscribed with the words “Guardians of America’s Freedom.” Representing all branches of the military, The Military Working Dog Teams National Monument portrays a handler in combat gear with a Doberman Pinscher, German Shepherd, Labrador Retriever, and Belgian Malinois. To the side of the monument is a special tribute to war dogs of Vietnam called the “Not Forgotten Fountain.” In honor of the service dogs left behind after serving during the Vietnam War, a bronze soldier pours water into his helmet and that fills a small pool for dogs to drink from during their visit to the monument. Members of the public can access the monument by requesting a base pass at the visitor’s center – dogs are welcome.

Wagging Tails offers a 10% discount to veterans year-round in honor of their service to the country. As you celebrate Memorial Day this year, remember the canine soldiers and their service as well.