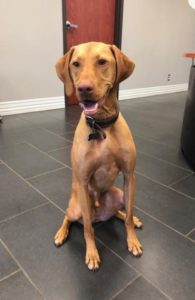 One-year-old Blue has been part of our Bloomington pack since he was only three months old. When this frisky Vizsla comes to WTPR, he really loves POOL DAYS. Once he’s done wrestling and chasing his doggy friends, he also enjoys settling in for a nice nap and snuggle.

When Blue isn’t at Wagging Tails, he likes to wrestle with his human brother, 5-year-old Bodin. One of his favorite ways to play involves grabbing Bodin’s pants and pulling him around the house until they finally come off!

Blue is a sweet boy who loves being the center of attention, often nosing you for pets and playing “keep away.” His owner Rhonda also told us that Blue keeps his family on their toes, especially since he learned to turn the faucet on so he could drink his water his favorite way — straight from the tap! 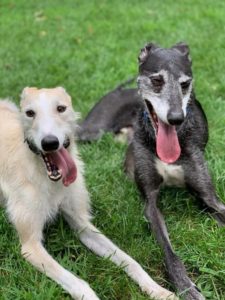 Toby and Teagan have been coming to our Eagan location for three years. At six, Toby takes his big brother role very seriously and wishes he didn’t have to share 4-year-old Teagan with anyone — and Teagan seems to feel the same way! These two dogs are either lurchers or staghounds and love spending time together. At home, you can often find them lounging on their couch in their room “Hound Town” while keeping an eye on the neighborhood. When they’re with us at WTPR, they’re lapping up attention from the staff.

These two rescues from Denver failed miserably at keeping coyotes away from the farms where they worked. At home with Kelly, Steve, and Clare, though, these dogs are total winners. The family loves Toby and Teagan’s unique personalities. When out on the streets, Toby acts as mayor of the neighborhood, being sure to greet everyone he passes. But, once he gets home, he’s a strong-willed pooch who can be stubborn. Kelly and Steve say that Teagan is the exact opposite; outdoors, this feisty girl is tough and ready to rumble. Back inside with her people, however, and she’s a cuddle bug who can’t get enough snuggles.