Harley the Goldendoodle has been part of our pack for nearly a year. At 1-1/2 years of age, this goofy boy is super sweet and loves spending his visits wrestling with other dogs and getting lots of snuggles from the staff. 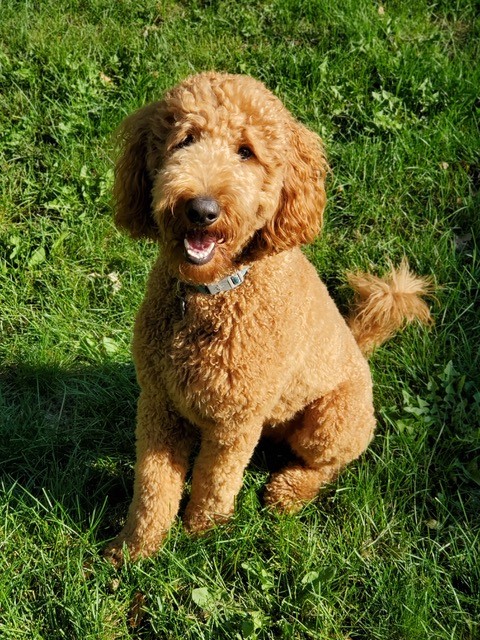 Harley shares his home with several siblings, including a 13-year-old Lab, a 21-year-old orange tabby cat, and an almost 4-year-old human. His owners, Lindsay and Chris, tell us that Harley is super smart, loyal, and in training to become a therapy dog someday. At the moment, he’s working on passing his Canine Good Citizen test.

When Harley isn’t working on his training, he stays busy playing at dog parks – especially with his best buddy Mabel who could be his long-lost sister! – and getting pets, scratches, and hugs. He’s also obsessed with finding squirrels and dreams of catching one someday.

Aside from Harley’s charming disposition, no one can resist his super soft, fluffy fur. In fact, his owners were once told they should have named him Fozzy, after the Muppet – and we agree! His coat is utterly irresistible too, and Harley looks just like him!

What’s the best part of having Harley in their lives? “Sleeping and cuddling next to our dog in bed. AND getting to explore dog parks in the area with our best buddy!”