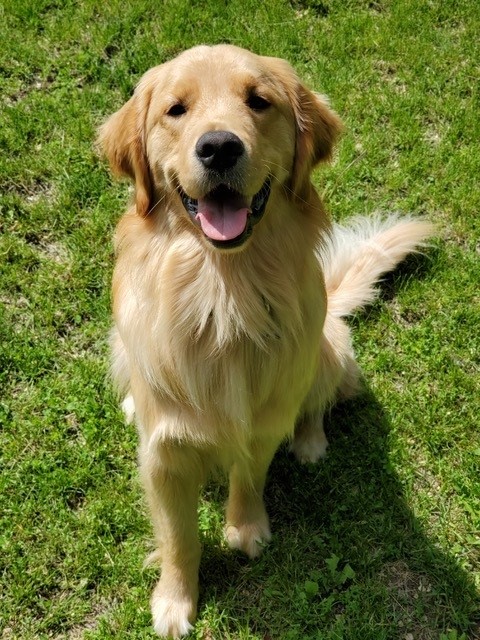 Hudson the Golden Retriever has been part of our pack since he was a wee pup. He’s a people-oriented pooch who loves spending time with the WTPR staff during his visits, especially if it involves one-on-one playtime with our Play Coaches! Otherwise, you can usually find Hudson keeping a watchful eye on the action, finding ways to get involved in whatever the humans are up to, and getting plenty of pets.

When Hudson isn’t at The Resort, his owner Nicole says he’s a terrific combination of an active, high-energy dog and a lap dog. He loves helping everyone around him, even by carrying his own leash, and seems happiest when holding something in his mouth. At 18 months, Nicole says he can still be a bit mouthy, but he’s always willing to take a toy when given the option.

Nicole also told us that Hudson doesn’t do anything half-heartedly – including exploring every mud hole and puddle he finds. This spring, she lost track of how many times Hudson came home from the park coated in mud from nose to tail! Fortunately, he doesn’t mind water either. While he’s not thrilled with shampoo, he adores lying in the bathtub and drinking water from the tap.

But what’s the best part of having Hudson in your life? “Hudson is my opposite in so many ways,” Nicole told us, “I really appreciate his ability to get me to take a time out.”