Leo the Miniature Schnauzer has been part of our pack for over a year now. 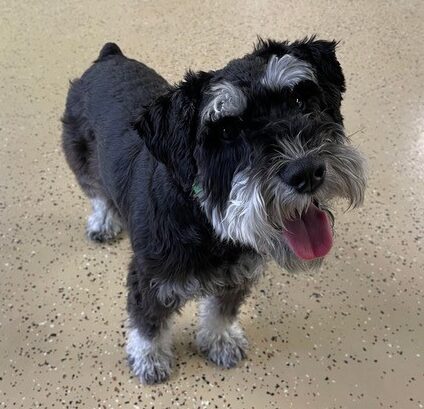 During his visits, this frisky two-year-old enjoys playing with his friends and taking walks. But, most of all, Leo loves supervising the other dogs at The Resort. In fact, you can often find him atop a plastic stool so he can keep a watchful eye on what everyone is doing – a job that’s earned him the nickname “The Hall Monitor”!

This dedicated little hall monitor doesn’t shirk his responsibilities when he heads home at the end of the day either. Leo simply turns his watchful eyes on his human family – Stacey, Dave, and Ben – and keeps tabs on them at all times instead!

Stacey and Dave, say it’s impossible to resist Leo’s expressive face. They love how he smiles when they throw his “Froggy” while playing fetch. And his heartbreaking pout when they have to go and he knows he can’t come along makes it hard to leave. But Leo has one habit that Stacey and Dave don’t love. He loves to bark. It’s a good thing he’s so irresistible!

What’s the best part about having Leo in their lives? “He is so loving and a great snuggler,” Stacey and Dave told us. “We love you so very much, Leo!”