At just over a year old, Oso is a playful pup who enjoys spending time with everyone – humans and dogs alike! His owner Melissa describes him as “the life whisperer” and says that he loves life and everything in it.

A German Shephard/Husky mix, Oso is loyal, obedient, calm, and very well-behaved. When Melissa wakes up in the morning, he’s watching and waiting for her to invite him for a cuddle. When he hears, “Ok… come cuddle!” Oso leaps into action, eager for snuggling to get underway. He also waits patiently to eat, no matter what is placed in front of him, until he’s given permission!

Oso’s relaxed nature makes him a wonderful companion. Melissa tells us, “He does not fight me on anything, ever. He is just a dream dog….” 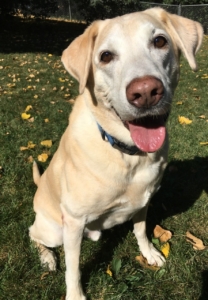 Ten-year-old Gus’ favorite part about Wagging Tails isn’t the dogs, it’s the people! This love bug tips the scales at 90 pounds and has the fierce bark of a protector, but he’s all about tail wags and head scratches. He even lets his little sister Lucy the Cat run things at home!

When Gus isn’t playing fetch with his tennis ball, this Labrador Retriever is trying to get scratches on the back. He loves them so much, he’ll even give you a little encouragement to get scratching by trying to walk between your legs!

Gus is a calm, loveable, and sweet boy, but really dislikes thunderstorms. When the weather is bad, his owner Linda knows she will find him curled up in the bathroom.

What’s the best part of having Gus in her life? Linda says, “When he looks up at you with those big brown eyes and melts your heart!”