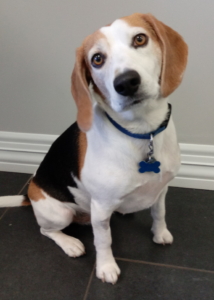 Kuno has called our Bloomington location his home away from home for two years now. A smart pup with a lot of tricks up his sleeve, he can throw a stick, bow, wave, and put toys in a wagon – a trick that comes in handy when it’s time to clean up the house!

This little beagle has a big voice, but he saves it for trips to the dog park so he can show the big dogs who’s boss. He’s also a playful outdoorsman who loves hiking in the woods, kayaking, and riding in pedal boats with his owner Denise. In fact, he loves the water so much that as a youngster he would drop his ball off the pontoon boat and then jump into the lake to retrieve it!

Kuno is an affection pup and loves spending time with people. What’s the best part of having him in her life? “Kuno is a smart, loving little boy who loves to be loved,” Denise told us. 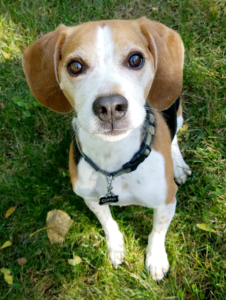 Beagles are top dogs this month with Coffee taking the Tail Wagger prize at our Eagan location!

This 6-year-old has been playing with his friends at doggy daycare “Playdays” for four years. Next to his human brother Ian, food is Coffee’s favorite thing in the whole world. Always scrounging for tasty morsels, he even tries to knock the food containers over at Wagging Tails! After at least one successful attempt, Coffee knows that there’s good stuff to be had and he’s not going to give up until he gets some.

“Coffee isn’t a cuddler, but is so cute, especially when he’s mellow and asleep!” Owners Janelle and Mike tell us. But what’s the best part about having Coffee in their lives? “Coffee and Ian are the best of pals.”