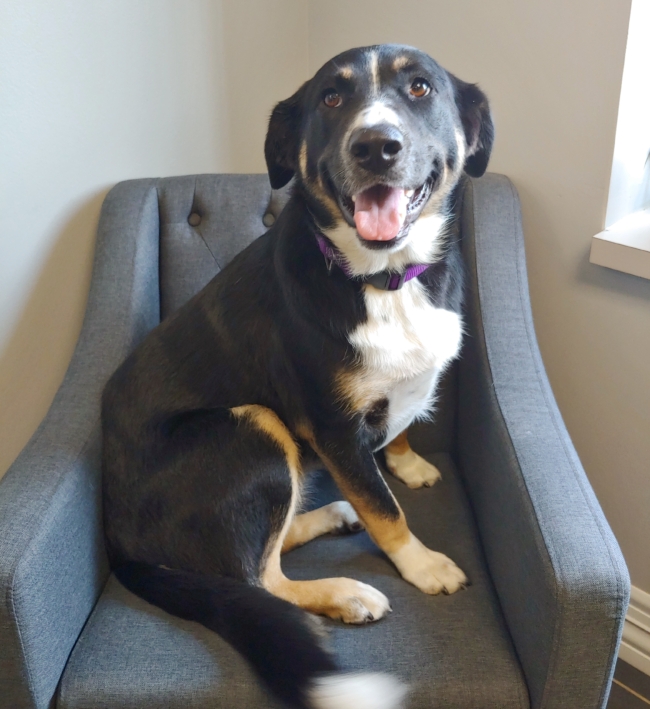 Josephine Claire, aka JOJO, has been coming to Wagging Tails’ doggy daycare for almost a year now. When she’s feeling rowdy, JOJO likes playing “chase me!” Once she’s tired out, she prefers settling down on the steps and chilling out.

This 18-month-old Alaskan husky mix loves spending time with her canine best friends, especially her boyfriend Max who lives down the street. JOJO loves Max so much, she whines to go visit and will lie down in his driveway to wait for him if he’s not home.

JOJO is an extremely confident and vocal alpha female who makes sounds like a Wookiee. She takes a special pleasure in yawning, stretching each one out and punctuating it on the end for dramatic effect. In addition to her funny sounds, one of JOJO’s sweetest habits is climbing into bed for cuddles each morning before the day begins. Less charming is her bad habit of chasing loud cars, trucks, and motorcycles.

We asked JOJO’s owners Steve and Mollee what the best part of having JOJO in their lives was. “JOJO is extremely affectionate, absolutely immune to Minnesota winters, and loves her canine cousins and human nieces and nephews,” they said.

Hannah and Tucker are three-year-old American Staffordshire Terrier/Lab/dachshund mix littermates rescued in Phoenix. These playful pups were adopted a few months apart, but they’re absolutely devoted to each other. They’ve been coming to our Eagan location for approximately two and a half years, and the social butterflies enjoy playing with their doggy friends, having walks, and one-on-ones with the Canine Coaches.

These canine siblings can both be mischievous, but it never shows up at the same time. Tucker enjoys collecting everyone’s shoes and can’t jump onto a couch or bed without bringing one along. He also likes to play watchdog, dance on his back legs, and watch TV. Even though he dislikes most men because his previous male humans were abusive, Tucker is a smiley boy who is very loving and protective of his family.

Hannah can be stubborn and likes things done her way. It can be harder to win a smile from her than Tucker. But, when these pups do smile, they brighten the mood in the whole house; the family feels every day is better because of these dogs.

What’s the best part of having Hannah and Tucker in their lives? “Getting to take care of them and the ways in which they take care of the family,” their owner Cirien told us.