Three-year-old Georgie and her nearly 5-year-old sister Billie are the of best friends. This dynamic duo has been part of our Bloomington pack for nine months.

Georgie is a mixed breed rescue that might contain rat terrier and corgi or Jack Russell and dachshund. No matter what breeds make up this charming little girl, Georgie makes her owner Wendy laugh every day. Georgie was found wandering around in a parking lot in North Minneapolis over a year ago and used to spend all of her time hiding. But her step-sister Billie helped bring her out of her shell, and Georgie’s blossomed into the loving and sweet dog she is today.

Big sister Billie is a very loyal rat terrier who likes to play, burrow, bark, and snuggle. You also have to keep on eye on your money when she’s around because her love of shredding paper has led her to destroy $20 bills in the past! Billie’s quirky habits and persistent, stubborn nature have helped her earn the nickname “Billie Goat” in her house.

What’s the best part of having Georgie and Billie in her life? Wendy told us she’d had another rat terrier who died two months before she got Billie; and Billie was born on the same day her beloved Scout died.

“I never thought I could love a dog as much as my first, but Billie showed me that the heart can expand and grow when you least expect it,” Wendy said. And when she brought Georgie home, she immediately bonded with Billie as though they were soulmates separated at birth. “Georgie is so happy,” Wendy said. “She’s come out of her shell and is a loving, sweet dog. I feel grateful to have her in my family.” 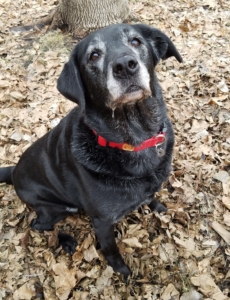 Boomer is a Labrador just shy of ten years old and has been coming to our Eagan location for six years now. An enthusiastic and playful pup, Boomer has had many packs over the years, from Labradors to terriers and toy poodles. While Boomer doesn’t have any siblings at home, she has a lot of human and canine cousins, and many call her “Cousin Boomer.”

This beautiful girl is a water dog to the core and didn’t realize until she was three or four that her owner Benjamin’s shower time wasn’t meant for her too! Boomer loves water so much that she used to be a competitive dock diver. When she hits the water these days, Boomer needs a British lead leash to help her exit the pool or lake. This is because she loves the cheering spectators so much, she’d rather run back and forth in front of them instead of going back to her handler!

What’s the best part of having Boomer in his life? “The constant reminder that life really is exciting,” Benjamin said.