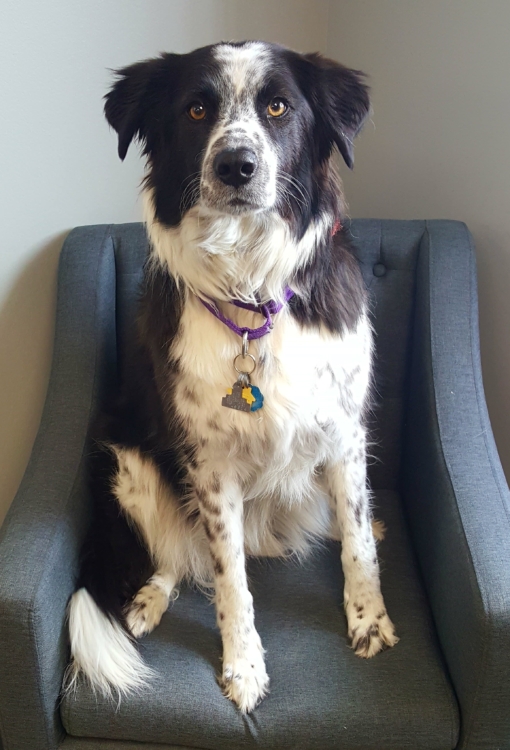 Kai is a border collie and Great Pyrenees mix who’s been coming to our Bloomington location since she was adopted in 2015. This sweet girl loves playing and wrestling, but her owner Tony also told us he’s never seen her make it through an entire day without a good, solid nap.

Tony thinks Kai is about six years old. When they first went to meet her, she was on a foster farm in Faribault with seven other dogs. While the other dogs rushed to the car to greet them, Kai stayed back and waited for them to come to her. Tony says that Kai knew from that very first day that she was going to make them work to earn her love.

This sweet girl loves a good cuddle, and she’s very particular about it. Kai will snuggle with just about anyone, but absolutely no movement can occur when a good cuddle is underway. Tony says that even if you move a toe while she’s sleeping, Kai will jump up immediately and walk away because of being disturbed.

Kai shares her home with two newts, but Tony doesn’t think she realizes they’re there. She does, however, love spending time with her cousin Charlie, an English bulldog, and has numerous friends in their apartment building. When Kai comes to Wagging Tails, she enjoys being doted on and wants constant reassurance about how much we love her. And we do! 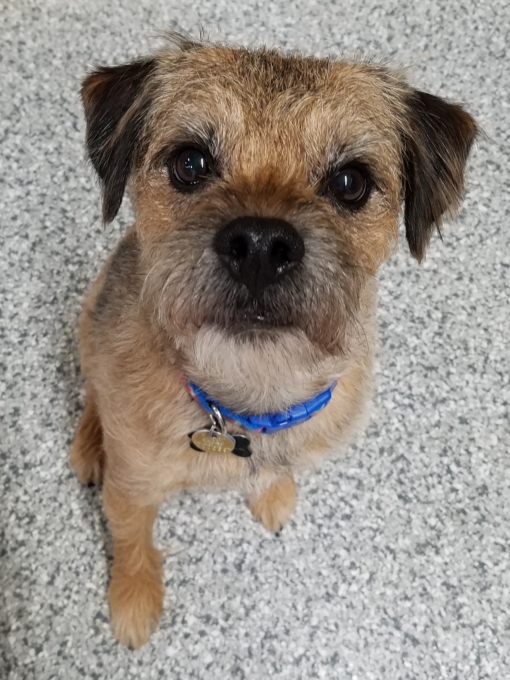 Albus, the border terrier, has been a magical presence in Eagan for the past year and a half. When he isn’t busy running around in the play areas, six-and-a-half-year-old Albus loves coming up front to beg for treats.

This frisky pup, Albus takes his responsibilities as Dumbledore’s namesake very seriously. In the right moments, he even responds to the command “Stupefy!” and falls to the ground stunned – especially if the command involves a chopstick; oops, we meant a magic wand.

Albus is an only child who loves attention but isn’t a huge snuggler. Still, it’s hard for him to resist climbing under the covers for a cuddle on a cold night. His owners Lauren and Kevin tell us Albus loves playing in front of the fireplace during the winter, but sometimes gets startled when he sees another dog’s reflection staring at him in the glass doors!

Lauren and Kevin love Albus’s quirky characteristics and his independent, stubborn, and energetic terrier nature. They affectionately call him their little weirdo and say it makes him a perfect fit for their family. His unique temperament keeps him happy and content just about anywhere he goes, and they can’t imagine life without him because he brightens each and every day.

But what’s the best part of having Albus in their lives? “Coming home from work each day to a happy boy (or coming to Wagging Tails to pick up a happy boy)!” Lauren and Kevin told us.