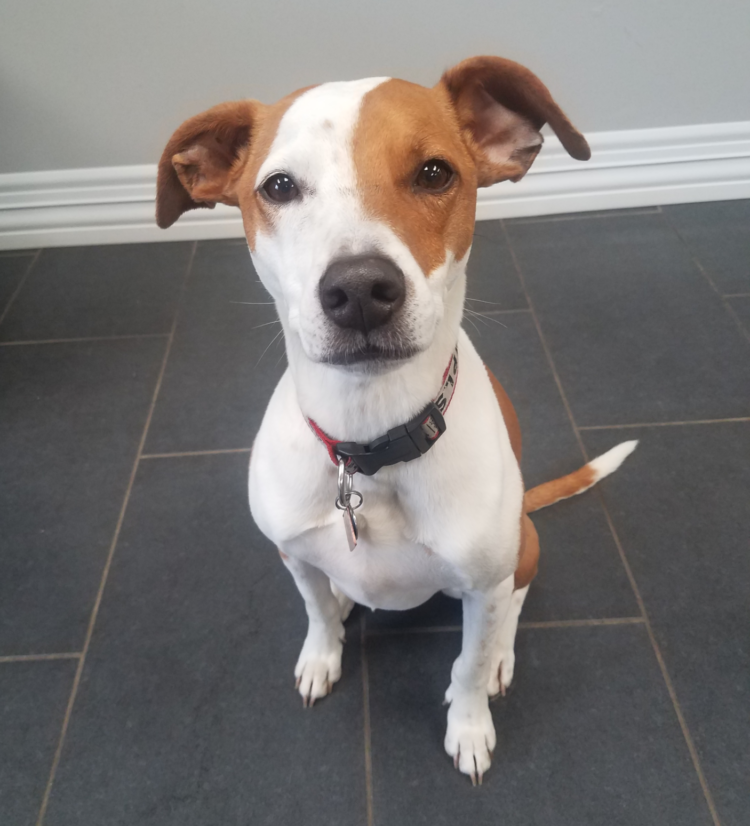 Kemper is a playful terrier mix who’s nearly four years old and has been part of our Bloomington pack for over two years. During the summer months, Kemper loves sunbathing outside during his visits. But when the weather doesn’t cooperate, you can usually find him supervising the action in the play areas from one of our ramps.

After a good doggy daycare “Playday” session, Kemper likes to ride shotgun with his dad while they pick up his mom on their way home. Bruce says that Kemper is usually so tired, though, that he doesn’t realize that Jenny has gotten in the car until she’s already climbed in the backseat! It doesn’t take long before Kemper joins her for some pets, however, and Bruce plays chauffeur on the drive home while they snuggle in the backseat.

Kemper is a sweet and loving boy who knows what he wants. When he’s ready for a walk or to go outside, Kemper disappears into the living room and waits for Bruce or Jenny to find him. At night, he likes to sleep in bed with his people, unless they disturb him by moving even the tiniest bit. Kemper’s also happy to go into the bedroom and tuck himself in for the night when he’s done for the day. And this smart boy knows that if Bruce or Jenny is on the phone, he should go look out the window because one of them is coming home any minute! But, if you really want to know how Kemper feels, you need to watch how he moves his ears or listen to his sighs. Unfortunately, Bruce says Kemper’s sighs can mean he’s bored and wants to go for a walk or that he’s tired, but they all sound the same!

What’s the best part of having Kemper in their lives? “We rescued Kemper at six months old. We don’t know what happened in his life beforehand, but it left him a little scared of the world,” Bruce said. “The best part of owning him is showing him every day that it’s not a scary place and watching him become just a little more confident.” 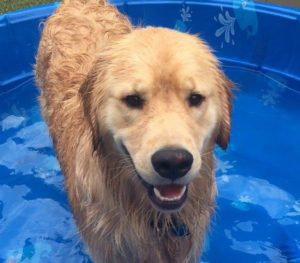 Two-year-old Ozzie has been coming to our Eagan location since he was a puppy. During his visits, this happy golden retriever loves to bark at his friends — especially the other Goldens! — until they play with him. Once they do, he’s quick to give up and roll over on his back while they romp. Ozzie also loves spending time with his human coaches, getting lots of cuddles and pets.

If he can’t play at Wagging Tails, Ozzie likes to wrestle with his dad, Tim, instead. To get Dad to play, Ozzie will play bite Tim’s toes while he relaxes in the recliner! While Ozzie loves to wrestle, he isn’t the most athletic of dogs. Tim and Kelsey also describe him as “being a bit on the husky side.” But these minor details didn’t stop Ozzie from surprising them once by jumping up on the dining room table from a standstill during a big family dinner!

When he’s not dancing on tables, this lovable pooch makes friends everywhere he goes. On walks, Ozzie is often surrounded by a group of neighborhood kids. When this happens, he likes to sit in the middle of the circle with his head thrown back, smiling up at them with a happy grin. Ozzie’s also a kind and gentle little lover who seems offended when squirrels and rabbits run away from him.

While he’s a people and animal lover, Tim and Kelsey told us that Ozzie is also a lazy boy who likes to sleep in late. In fact, the only time he really gets cranky with them is if they wake him up too early! Ozzie will also glare at them when he’s ready for bed and they aren’t there yet. They also say that he sways his hips when he walks like he’s got swagger and squeals like a pig when he’s really excited.

When we asked Tim and Kelsey what made Ozzie extra special, they said, “Ozzie makes everyone who sees him smile. He has the type of demeanor that makes you feel calm and happy, just by being in his presence.” They also said that Ozzie has made their family feel complete.