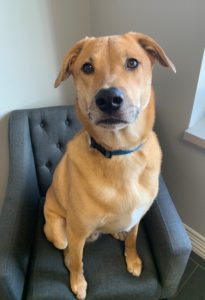 Sweet Simba has been part of our Bloomington pack since he was around six months old. And, after spending a year with this American Kennel Dog (Lab mix), we can’t imagine a moment without him.

When Simba comes to WTPR, he loves playing outside, running around with his four-legged friends – especially Tippy the Doberman – and keeping an eye on things by the Wait Gate. If you’re really lucky, though, he’ll engage in a little “conversation” with you!

Simba’s owners, Mike and Liz, tell us that he was a silly sleeper as a puppy. They’d often find him snoozing halfway under the couch, hugging a table leg, or even on the floor in the front seat of the car! Now that Simba’s grown to be a big boy, they marvel over the teeny, tiny ball he curls up in to go to sleep. He’s also become quite the drama queen who will scold you if he’s not walked “on schedule,” and he loves keeping watch over the neighborhood from his spot in the front window. 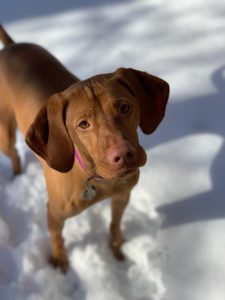 At 2-1/2 years of age, frisky Nara is a total heartbreaker. She’s been coming to our Eagan location for two years now and loves giving hugs and kisses to everyone she meets, both dogs and humans alike. During her visits, you can often find Nara keeping an eye on the action and peeking over the fence into the other playrooms.

When Nara isn’t at WTPR, she loves spending time with her owners, Kristen and Tom. They tell us that she’s the sweetest dog ever, full of affection, energy, and curiosity. Nara also plays hard and sleeps harder, which also makes her the best snuggle companion. In fact, she convinced Kristen and Tom that she needs to sleep with them at night, which ends up being a tight squeeze! And Nara doesn’t stop there when it comes to her snuggling demands either; she won’t come to bed until her mom does, even if Dad is already there.

Nara loves the warm weather when she can spend as much time as possible outside. Kristen and Tom also tell us that she’s scared of farts – from others and her own! But that’s not the only sound that concerns her. If you sneeze, she runs up to check on you to make sure you’re okay!

But what’s the best part of having Nara in their lives? “Her cheerful nature,” Kristen and Tom said. They went on to add, “Though she’s our first dog, we’re not sure how another could get any better.”