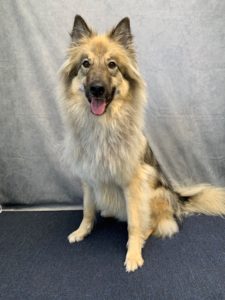 Griffin has been part of our Bloomington pack for the past year and a half. This boy thinks he’s the boss at Wagging Tails and can go anywhere he likes. He takes this responsibility very seriously at home, too. In fact, Griffin keeps track of his owner’s schedule, following them around to make sure they stay on task and take him to all of his favorite places on time.

When Griffin comes to Wagging Tails, he loves to play hard with Kingsley, the Shepherd-Husky mix. He also stays busy running around the yard with Ziva, the Alaskan Malamute, before taking a quick nap with his bud Dodger, the American Pit Bull.

At home, Griffin keeps the entire family safe by howling along with police or fire sirens whenever he hears them, especially if they are nearby.

Griffin’s owners also tell us that this boy loves people so much, sometimes, he can’t get close enough. But weighing in at 75 pounds makes him an awfully big lapdog! 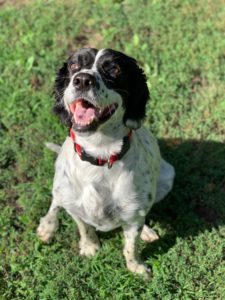 Artemis Jane – or, as we like to call her at WTPR, Artie Farty – has been coming to play at our Eagan location since 2016. This 4-1/2-year-old Field Bred English Springer Spaniel is a sweet clown who loves to hug, snuggle, give kisses, and play all day long, whether she’s at home or Wagging Tails.

True to her hunting genes and namesake, Artemis is the goddess of the hunt. Her owners Chris and Amy say that, when she hits the field and woods, she simply doesn’t stop. And, while she’s at it, she hunts as hard in the last field on the last day as she did on the first. 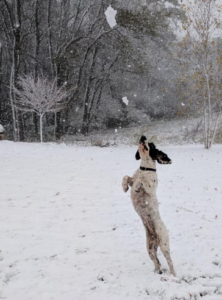 Artemis also loves culverts. They don’t know why, but she always has to run through every underground culvert they pass on each walk they take. But, even though she loves these underground tunnels, this little girl refuses to run through her play tunnel at home! Chris and Amy also tell us that Artemis refuses to eat when alone. Instead, she barks and paces, waiting until she has at least one family member present to keep her company.

What makes this dog extra special? “The way she hunts,” Chris and Amy said. “I absolutely love watching her work. It is her favorite thing to do in this whole world!”