Our Tail Waggers of the Month may be small in size, but they are big in spirit! 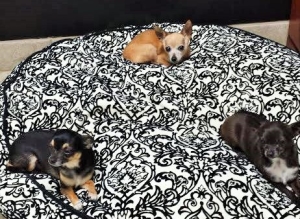 This pack of pint-sized pups is completely devoted to each other. Chloe, Biscuit and Jordan are never far apart, whether it’s following each other to the play area or curling up for a long nap. We’ve been pampering these pooches with cuddles and smooches since March of 2012 and we look forward to many more years to come!

Named after the Mexican state of Chihuahua where the breed was first discovered, additional details on its origins are a mystery. One popular theory is that they are descended from a companion dog from the Toltec civilization in Mexico. Another is that they are related to the Fennec Fox. Either way, Chihuahuas are the oldest breed on the American continent and the smallest breed in the world.

Chihuahuas may be small, but they are still active dogs that need regular exercise. It’s important to make time for play and to take them on daily walks. These little dogs are smart, loyal and make great companions, but like many small dogs can be strong willed. Be sure to take care during Minnesota winters – these little guys aren’t built for the cold!