You probably already know that dogs can hear way better than humans – sometimes even hundreds of times better. They’re especially good at detecting high-pitched sounds and frequencies, which helped their early ancestors find prey in the wild. However, a dog’s directional hearing isn’t as good. 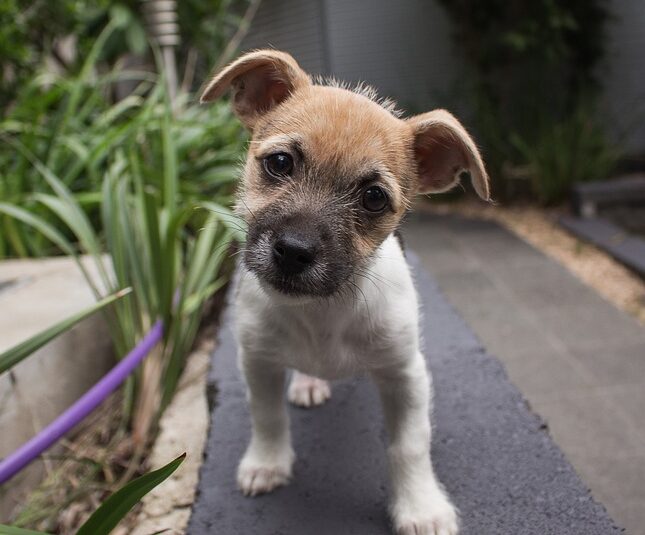 Human ears are designed to pick up sounds without having to turn toward the noise. That means we can hear without any problem, whether a sound comes from in front of us, to the side, or from behind. That’s not how it works with dogs.

Dogs have ear flaps that either partially or completely cover their ear canal where sounds get captured. This design acts as a protective barrier, but it also means they have to change position to get optimal sound. Fortunately, their ear flap is movable, so it’s easy for dogs to hone-in on the exact location of a noise by making slight ear adjustments.

However, some breeds still have challenges. For example, a German Shepherd’s ear flap can limit sound detection from the rear because of its position. On the other hand, Cocker Spaniels have heavy ear flaps that cover their entire ear canal, which can interfere with sound coming from all directions. That’s where a head tilt can help.

To compensate for their ear flaps, dogs tilt their heads and perk up their ears to get better sound collection. Dogs also try to read our facial expressions to translate human communication, and cocking their head helps them see better – especially if they have a long muzzle obstructing their view. On top of that, their middle ear muscles get controlled by the same part of the brain that manages facial expressions and head movements.

So, if your dog is looking at you attentively while tilting their heads, they’re definitely working hard to absorb and understand every word you have to say. Think of it as your dog’s way of thoughtfully nodding while you talk to show they’re listening.

Of course, it’s also important to note that some head tilting can indicate a medical problem, like an ear infection or a neurological abnormality. If your dog starts tilting their head without any auditory stimulation present, you should schedule an appointment with your veterinarian.

The next time you notice your dog hear something, watch to see if they tilt their head while turning to look in a specific direction.