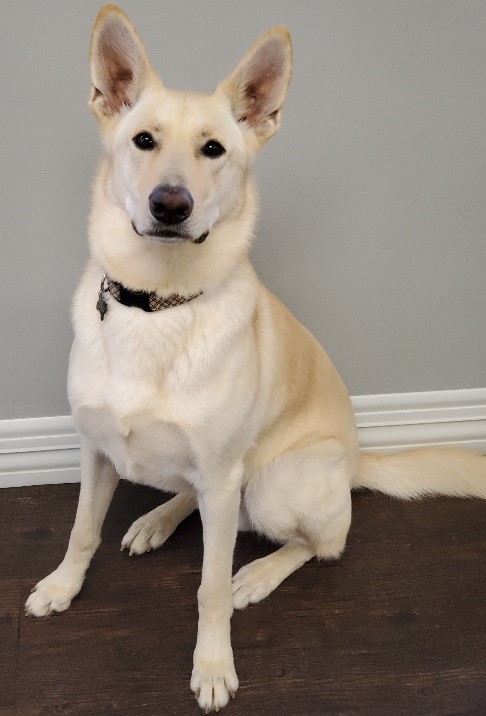 Percy has been part of our pack since he was around five months old – it’s hard to believe that was over two years ago! This beautiful, White German Shepherd loves seeing all his doggy friends during his visits but prefers spending time with the staff most of all.

In those first visits to WTPR, Percy was small enough to ride in the front seat. But he quickly learned that “going to see his friends” meant going to Playdays, and pandemonium ensued! Percy would become so excited, his humans could barely drive, and it only got worse when they finally turned onto Sun Drive. Now Percy travels to WTPR in style – a spacious car crate to ensure everyone arrives safe and sound.

When Percy isn’t spending time with his friends, he is busy focusing on his humans. They tell us he’s super smart and always ready to learn something. For example, Percy knows he shouldn’t jump up on you, so he jumps softly to the side instead. Since he can’t suppress his joy, Percy found a different way to express it! He also spends a lot of time coming up to his humans and laying his face in their laps, patiently waiting until they give him a pet and tell him what a good boy he is. This sweet display with his beautiful ears laid back always melts their heart.

In addition to being a smart and loving dog, Percy is also very aware of his surroundings, especially sounds. When he hears something, he stops and listens closely to confirm it isn’t an intruder and then goes back to business. Last month, a plane flew high overhead, and Percy promptly looked up, sat down, and watched for several seconds. However, once his human told him what it was, Percy was ready to resume his walk. His owners tell us he has a protective demeanor, but as soon as you say friend, he is all love. He wears his heart on his sleeve, and his smiles are the best!

So, what’s the best part of having Percy in your life? “Percy is the true meaning of love,” his owner Aliseabella told us. “The love and protection that Percy gives me makes me miss him every minute I am not with him.”