There is nothing mini about this Miniature Schnauzer’s personality! Miss Nya (short for Shanyatt) has been coming to Wagging Tails for two years now and loves our staff almost as much as we love her. When she’s not playing with her doggie best friends Wesley, Lucy, and Bogey, she can often be seen on the webcams begging the staff to hold her – if she’s not being held already! 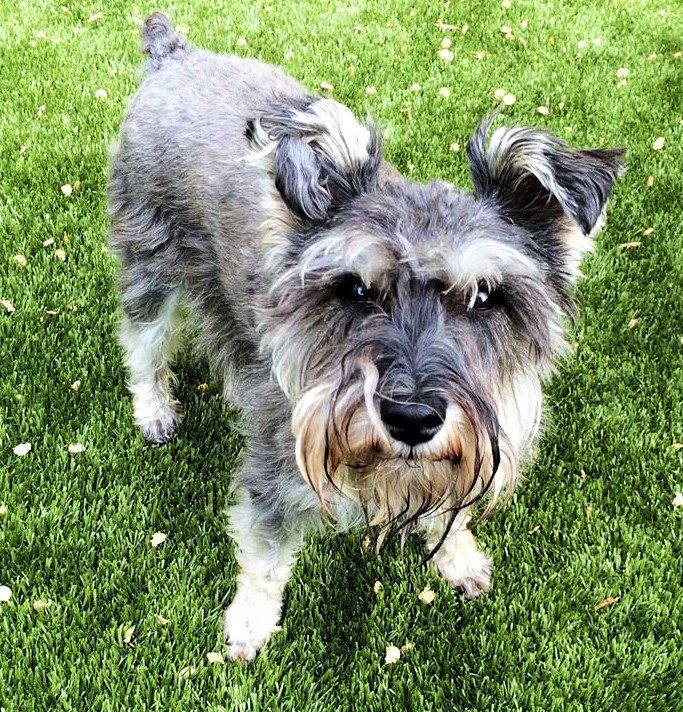 Nya’s sheer happiness is contagious, as is her enthusiasm. She loves amusing herself with a game of ‘throw and catch’ and can walk on her hind legs for impressive lengths of time! Outdoors, she loves chasing squirrels, rabbits, and birds but her tender heart is revealed when she doesn’t seem interested in actually catching them. When owners Matt and Andrea come home, her greeting and sheer happiness at the sight of them make it their favorite time of day.

Fiercely independent, Nya is a girl who likes things a particular way, starting with her morning cuddle. At mealtimes, she requires enticement, preferably in the form of chicken or cheese on top of her kibble. And when it comes to her toys, she does not like them to be moved. When Matt and Andrea tidy the house, Nya will covertly move all of her belongings out of the toy bin and back to the front door where she likes them.

Miss Nya joined Matt and Andrea’s family when the couple unexpectedly lost their dog, Nya’s sister. This makes Nya extra special because they still have a piece of her sister in their lives too. When we asked what the best part of having Miss Nya in their family was, Matt and Andrea responded, “She is loyal, stubborn, feisty and completely adorable – we couldn’t ask for more.”