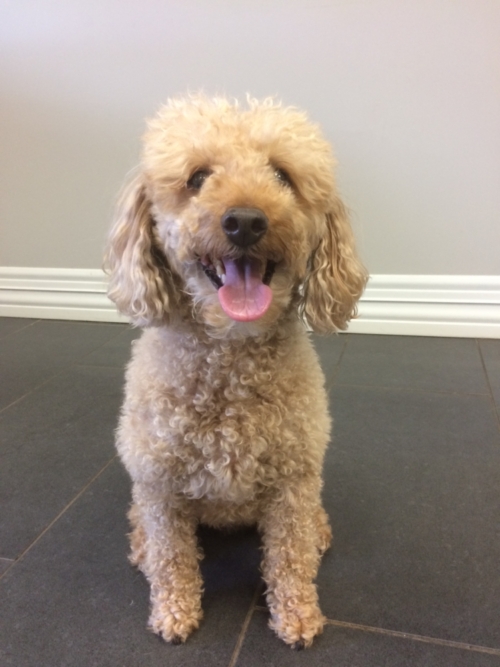 Miniature poodle Berrigan has been playing with his friends at our Bloomington location since it was Captain Canine. This friendly 10-1/2-year-old is cuddly, playful, and a bit of a tease! His owner Colleen tells us that he loves stealing pens and pencils, and won’t return them until he’s given a treat! He’s her devoted companion and constant shadow when they’re home together; if he isn’t sitting beside her, he is watching her or hopping up on the table to get her attention. Colleen also tells us that he loves to hold hands.

This friendly pup approaches almost everyone to play. In fact, one of his favorite past times is playing ball, but he’s only interested in fuzzy tennis balls – plain rubber balls will not do. He also loves to do his poodle dance for people he likes, though he’ll also do it for treats. In addition to his playful spirit, he also has those well-known poodle smarts and this industrious boy can open purses, pockets, and luggage if he smells treats inside! 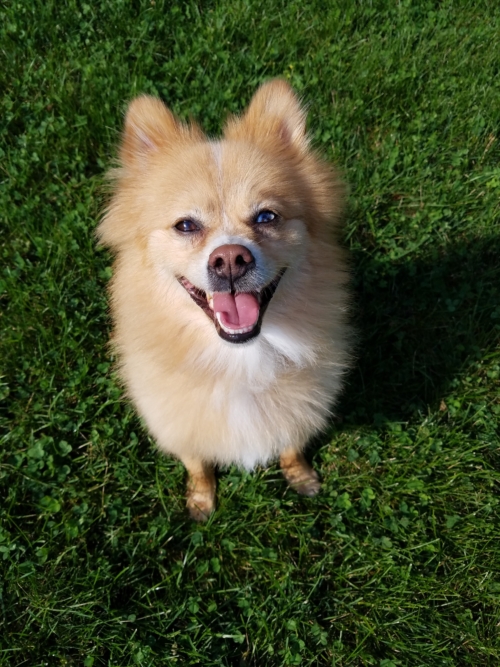 In Eagan, 4-year-old Tony is a “throwback” Pomeranian who has been coming to Wagging Tails since he was a puppy. Throwback Pomeranians are full-grown Poms who as adults have healthy weights over 14 pounds (the American Kennel Club designates the standard size of purebred Pomeranians as 3-7 pounds). When Tony’s at WTPR, this sneaky pooch loves lying in wait under the play equipment for his doggy friends to pass by and then attacks from his hiding spot! His spirited play always brings a smile to our faces during Playdays and Overnights!

At home, this happy boy is master of his domain. Owners Rick, Karen, and Kane refer to him as the “squirrelenator” – no squirrels are allowed in his yard! He is also a big help around the house, sliding his empty water dish across the floor until it’s refilled and dumping his food out of his bowl before he’ll eat it.