Milo Silbert has been a favorite at our Eagan location since his doggie daycare visits began in December 2013. This lovable rescue has truly blossomed in the forever home he shares with Jeff, Kate, and his little human sister.

A Border Collie/American Eskimo mix, Milo is a small dog who’s big on brains and personality. Once shy and subdued, the love and comfort he found with Jeff and Kate helped him develop into a friendly and sociable boy. He loves coming to Playdays for belly rubs, playtime with other dogs, splashing in the pool, and spending time with his favorite WT staffer, Chloe.

Milo is also helpful with household chores like picking up after himself in the backyard! When his mom or dad ask him where the poop is, he’ll run to the spot and place a paw in the air to point it out – a trick they never taught him. He is also careful not to hide his tasty treats too well, leaving them on top of pillows instead of hiding them so they’re easy for others to find.

What’s the best part of having Milo in their family? “I couldn’t begin to think of our lives without him,” Jeff and Kate said, “He completes our family in a way that is indescribable… he adds an element of humor, love and sheer excitement to our lives every day. He’s a handful, but I’m so glad he’s ours. I wouldn’t change one thing about our little weirdo.” 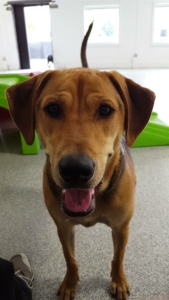 Ruby Thompson has called Wagging Tails Pet Resort her home away from home since October 2015. The sweet-natured 1-1/2-year-old Blue Tick Hound/Rottweiler mix brought joy and energy back into Tammy and Dana’s house after they lost their beloved dog Meatwad.

It would be hard to resist Ruby’s enthusiasm. The smile she gets when playing outside helped her earn the nickname “Smiley” – she just can’t contain her happiness when playing in the wading pool or chasing butterflies and bugs. Her other nickname, Miss Sassypants, shows that this girl isn’t a pushover. In fact, she shows no sign of backing down from her arch nemesis, The Flashlight, and will go to great lengths hunting it down even when it’s been hidden from her.

This social girl loves doggie daycare at Wagging Tails, especially when she can play with balls or the other puppies during Playdays. She also loves playing with senior dogs and makes sure to save some energy to play with her 14-year-old sister, Snauzeberry, when she gets home.

What’s the best part of having Ruby in their family? “Ruby has been a blessing,” Tammy and Dana told us, “After we lost our dog Meatwad the energy had left our home, but Ruby has helped fill the hole in our hearts and Snauzeberry’s also. Ruby is very loving and wants to be involved in everything we do, there is never a dull moment in our home.”