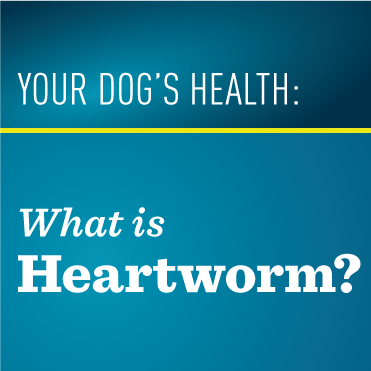 Most pet owners in Minnesota have heard the word “heartworm” and know they should protect their dogs against it, but do we actually know what it is?

Heartworm is a potentially deadly disease spread by the mosquito. Many animals can contract heartworm including wolves, coyotes, foxes, and cats, but dogs are considered “natural hosts” and the risk of death is high for them if the disease goes unchecked.

The dangerous heartworm cycle begins when an infected mosquito bites a dog, introducing microscopic heartworm larvae into the dog’s body through the bite mark. Once in the dog’s bloodstream, the worms begin growing while moving towards their host’s heart, lungs, and associated blood vessels. It takes heartworm larvae approximately 6 months to mature to adulthood at which time they can live for 5 to 7 years. If left untreated, these parasites can grow to be a foot-long and reproduce into the hundreds, leading to severe lung disease, heart failure, and damage to other organs in the dog’s body. Infected dogs also become carriers of heartworm which can then be spread to other animals if they are bit by a mosquito. Because of their proximity to urban areas, fox and coyotes are also considered carriers of heartworm disease.

While heartworm disease can be treated in dogs, it often causes long-term damage because infected dogs typically do not show symptoms in the early stages of the disease. Symptoms can include a mild persistent cough, decreased appetite, weight loss, and fatigue after moderate activity; as the disease progresses, heart failure can develop and a dog’s belly can become swollen. If large numbers of heartworm are present, the infected dog is at risk of “caval syndrome,” or cardiovascular collapse, a life-threatening condition demanding surgical attention to remove the blockage.

Indoor and outdoor cats can also contract heartworm, but the disease affects them much differently. Because they are an “atypical host” for heartworms, the parasite usually does not survive to adulthood, which keeps the worm’s size and numbers significantly lower. Heartworm disease can still cause damage to cats, however, and there is no approved treatment, so it is important to protect your feline friends from infection as well.

Talk with your vet to ensure that you are making effective choices to protect your pets. Dogs should receive monthly medication and be tested annually to confirm that heartworm infection is not present. Make sure cats are screened for the disease prior to beginning a heartworm preventative. Remember, when it comes to heartworm disease, prevention is everything.