The Most Popular Dogs Names of 2017

When it comes to naming your dog, it can be hard to know where to start. 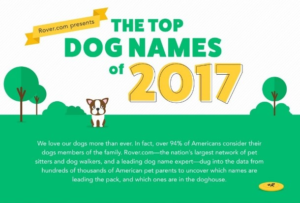 Last year, Rover.com’s survey on the most popular dog names of 2016 revealed a lot about us as dog owners. Human names were on the rise, and dogs named after popular TV shows, movies, or book characters made up 53% of the country! That made us wonder, how would 2017 stack up?

It turns out, the top five names for male and female dogs remained the same! While some of them shifted in position of popularity, the top female names still included: Bella, Lucy, Daisy, Luna, and Lola. And, the top five male names were still: Max, Charlie, Cooper, Buddy, and Jack.

But, human names continue to rise in popularity from 28% in 2016 to 44% in 2017. In addition, there was a steep increase in dogs being named after powerful women – popular sources of inspiration included the movie Wonder Woman and female celebrities like Oprah and Madonna. There was also a 200% increase in dogs named Atwood, thanks to the success of her novel The Handmaid’s Tale as a television series.

Television served as inspiration for Stranger Things fans as pet parents everywhere enthusiastically named their dogs after Eleven and Barb. And, Game of Thrones characters continued to leave their mark with dogs named Khaleesi, Snow, Arya, Jamie, and Sansa increasing 12%.

Pet parents also tapped into nostalgia when it came to finding the perfect name for their dogs and showed their love of the 90s with names like Nirvana, Kurt, Daria, Buffy, and Willow. The Spice Girls even made appearances with Ginger, Baby, Sporty, Posh, and Scary.

It seems that pop culture is still king when it comes to naming dogs and remained at 53%.

How did you name your dog? Tell us in the comments below!