Bloomington Tail Wagger of the Month 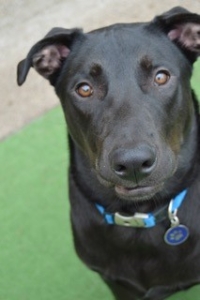 Charlie has been coming to at our Bloomington location since he was four months old. A black Labrador / German shepherd mix, he loves spending time with the WTPR staff and his canine friends during his weekly doggy daycare visits.

Now 14 months old, owners and Steve and Ben tell us that Charlie is an only child who they love to spoil. He enjoys watching television and movies as long as there’s nothing scary on the agenda; the last time they tried one, he growled and barked until they turned it off. He’s also a great and happy dog but can be a struggle in the morning. This pup likes to sleep and can be hard to wake up – he’s definitely not a morning dog!

Once he’s gotten going, Charlie is a busy boy who loves to play whether it’s with laser pointers, his furry friends, or chewing on bones. He even created a game called “Hide the Squeaker.” After removing the squeaker from his stuffed animal, he hides it under the couch and lets Steve and Ben know he can’t reach it until they retrieve it for him – then he will promptly hide the squeaker under the couch again!

What’s the best part about having Charlie in their family? “He is an always happy dog, he is excited to meet anyone and everyone,” Steve and Ben told us. “But the best part is that he is a constant cuddler. Always there for a good snuggle.”

Eagan Tail Wagger of the Month 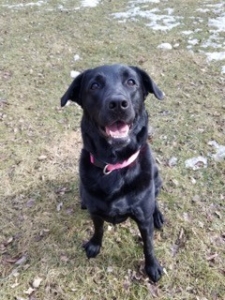 Three-year-old Sydney has been coming to Wagging Tails since she was she was a puppy. A black lab to her core, she loves playing in the water at WTPR on pool days, playing fetch outside, and socializing with her furry friends. She’s always up for adventure and likes to ride shotgun whenever she’s in the car – whether the seat is available or not!

This happy girl loves to share big heart through her exuberant smile and wagging tail. She doesn’t just dazzle her humans with smiles though, she also has a habit of giving “puppy dog eyes” when she really wants a treat. Owners Jesse and Sarah tell us that they couldn’t have asked for a dog with a sweeter disposition to love and care for.

What’s the best part of having Sydney in their family? “She is well-behaved around other dogs and people and that we get to call her our fur child!” Jesse and Sarah responded enthusiastically.