Have you ever wondered what your dog was trying to tell you? We may not speak the same language, but dogs are expressive animals that give clues to how they’re feeling all the time. Eyes, lips, ears, tails, fur, and posture all offer insight into a dog’s present state. On their own, these behaviors can signal many different canine emotions, but when you put them together to create a picture of a whole dog’s state, they open the doors of communication with your best friend.

While maintaining eye contact is a good thing in the human world, it has very different meaning for dogs where it can be perceived as confrontational or threatening. When a dog is calm and comfortable, their eyes are a normal size, and they will look at humans with a relaxed expression. Eyes that appear to be larger or smaller than normal can indicate tension or stress. Squinting can be a sign of pain or ill health, though some dogs also squint when they’re relaxed. A dog’s eyes that are larger than normal, especially when you can see the whites (also known as “whaling”), can indicate aggressive behavior. Whaling is often seen when a dog is guarding a toy or treat and should not be confused with a relaxed dog looking at you from the side. 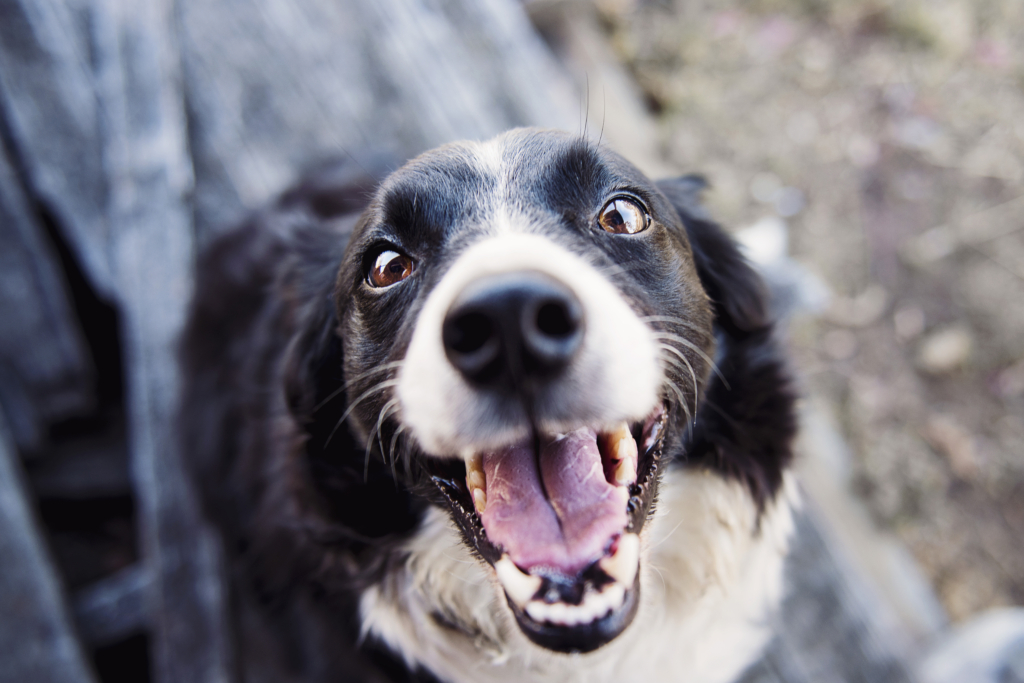 Similar to eyes, dog mouths can provide a lot of insight. Relaxed dogs often have their mouth slightly open or closed. Submissive or frightened dogs usually have closed mouths as well, but often flick their tongues, or have their lips pulled back at the corners. Some dogs even display “submissive grins” by pulling their front lips up to display their teeth. Dogs can also show their teeth when they’re feeling afraid. In these cases, their lips are typically tight and drawn at the corners of the mouth, and both front and back teeth are visible. If a dog is preparing to bite, their mouth is open, and teeth are exposed.

Dogs also communicate with their mouths by yawning. While yawning can be a sign of sleepiness for people, in dogs it can indicate frustration, stress, or a way to break up an interaction with an aggressive dog.

Regardless of what type of ear a dog has, they are always signaling their state. Relaxed dogs hold their ears in a natural position. When expressing interest in something, they often hold their ears up higher and point them in the direction that has attracted their attention. Pulled back slightly? That can indicate that they’re friendly whereas a dog whose ears are flattened reveal a frightened or submissive animal.

Unfortunately, a wagging tail does not always indicate a dog is friendly. Some dogs wag their tails when they’re feeling aggressive while other dogs can be friendly and never wag their tail at all. Relaxed dogs hold their tails in its natural position, and a happy dog can wave it at various speeds from side to side or in circular patterns. Similar to their ears, a tail may be held higher than normal when a dog is interested in something. However, a tail held high and stiff that’s being moved rigidly can indicate that a dog feels threatened. Nervous, frightened, or submissive dogs hold their tails lower, even tucking them tightly against their bellies depending on the intensity of their emotion.

Not only do dogs hold their hair up to communicate their response to a situation, they can also shed excessively when under stress. A dog’s ability to raise their hair along their spine is similar to a human experiencing goosebumps. “Raising the hackles” can indicate a variety of emotions including anger, fear, nervousness, insecurity, or even excitement.

The final clue dogs provide when communicating with humans is their posture. Submissive or frightened dogs try to communicate that they aren’t a threat by looking as small as possible. Assertive or aggressive dogs try to appear as large as possible sometimes leaning forward or standing on their tiptoes with heads raised and muscles tensed. A relaxed dog will stand evenly balanced on all four feet and will appear normal, even when running and playing wildly.

Put the Pieces Together!

Just like with humans, you have to put the pieces together to get the whole picture when trying to understand what a dog is communicating. For example, a dog with small eyes, tail pressed to the belly while trying to look small can indicate that the dog is afraid. A dog showing the whites of their eyes while leaning over a chew toy can indicate aggressive behavior. A dog with its hackles raised, ears pointed forward, and tail wagging in circles can indicate a high level of excitement.

Learning to read the signals dogs are sending is the first step in improving communication with your best friend, when interacting with new dogs, and to providing safe and positive interactions with other dogs in settings like dog parks. Wagging Tails staff members are trained in dog behavior to provide professional supervision during doggy daycare “Playday” sessions.

To learn more about dog behavior, contact us today!