The American people have been enamored with First Pets since the White House opened its doors in 1800. While past pets have included exotic choices like raccoon, tiger cubs, and parrots, dogs quickly became the most popular choice and First Dogs have been household names ever since. When President Obama took office in January of 2009, everyone waited with great anticipation to see the dog that would become the newest member of his family. 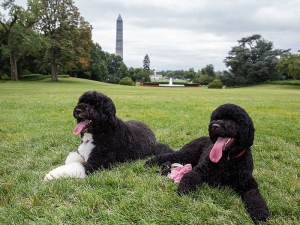 Barack Obama had promised his young daughters that if he won the presidency, they would get a dog – and the girls didn’t have to wait long. In April 2009, the Obama family introduced the world to their new 6 month old puppy, Bo, a Portuguese Water Dog. A gift from Senator Ted Kennedy and his wife Vicki, the youngster was the perfect choice for the household. Loving, intelligent, and easy to train, Portuguese Water Dogs are also considered a hypoallergenic breed – a necessity for the Obama family given daughter Malia’s allergies.

The role of First Dog is an important job that is filled with more than just relaxing in the Oval Office and taking rides in Air Force One. Bo’s schedule is often busy with official duties like greeting guests on White House tours, making appearances at the annual Easter Egg Roll, and visiting medical centers to cheer up patients. Despite all of his responsibilities, the Obamas make sure that Bo has plenty of time for fun. In fact, in 2013, they expanded their family one more time and adopted Sunny (also a Portuguese Water Dog) to keep Bo company and help share his official duties.

Bo and Sunny have even partnered to help raise awareness about pets and Emergency Preparedness: